Himachal Pradesh travel is a must for an avid traveler, especially for someone who loves mountains. The world’s largest and highest mountain range; Himalayas traverse through the state of Himachal Pradesh. This state is one of the top tourist destinations of India with enchanting and picturesque hill stations. The winters are extremely chill but summers are warm in Himachal Pradesh, India. The best time to visit Himachal Pradesh is during spring, which extends from February to April.

Surely the Gods live here; this is no place for men”, wrote Rudyard Kipling of Kullu, India’s valley of the gods. Located in the charming Kullu valley in Himachal Pradesh and set amongst the lower reaches of the mighty Himalayas, the small town of Kullu is famous for its temples, apple orchards, and the annual Dussehra festival, all of which attract hordes of tourists. Kulluis also known for its handicrafts. Beyond the town’s perimeter loom the magnificent greater Himalayas and the silver valley bisected by the Beas River.

One of the most beautiful hill stations of the country, Manaliis basically a small town in the Kullu valley of Himachal Pradesh. Termed sometimes as the cradle between the lesser Himalayas, Manali is extremely popular with tourists for its lavish display of unspoilt natural beauty. Rich in its scenic splendor, Manali draws a good number of tourists from within the country and abroad every year. Apart from sight-seeing, it offers immense scope for trekking, skiing and rafting.

Shimla is the capital city of the Indian state of Himachal Pradesh. Blessed with some of the most spectacular and beautiful landscapes anywhere, it is a travellers paradise -lofty snow peaks, deep gorges, lush green valleys, fast flowing rivers, enchanting mountain lakes, flower bedecked meadows, beautiful temples and monasteries steeped in time. Shimla is full of tourist attractions that are worth visiting. They may intrigue some with their rich historical legacy and for some, they are the perfect places to indulge in some good photography. Shimla is a photographer’s paradise and you will find some of the most picture perfect shots over here. Read on further about the famous tourist attractions of this lovely hill station of India and plan your tour to Shimla. May it be for relaxing, sightseeing, trekking, mountaineering, fishing, para-gliding, skiing, ice skating and golf, Himachal has it all…Come Explore Himachal with himachaltourist… Shimla was one a string of hill stations that the British established to escape from the scorching heat of the plains. Shimla’s salubrious climate, easy accessibility and numerous attractions have made it one of the most popular hill stations in northern India. The splendid views of the show-clad ranges of the Himalayas, fine walks through oak and flowering rhododendron, enchanting resorts within easy reach, golf Naldehra and skiing at Kufri and Narkanda make Shimala an attractive destination throughout the year. Shimla’s cool environs still remain the biggest magnet for Indian tourists. Shimla tourism is an ideal for those who plan to get away from the scorching heat of the plains and enjoy in the midst of the land of snow and clouds. Shimla is referred to as the ‘Queen of Hills’ because of its enormous scenic and natural beauty.Holidaying in Shimla is matter of heavy delight and fun. This hill resort is a perfect tourist destination. Shimla is situated at an elevation of 2159 meters above the sea level.

One of the best ways to discover the beauty and charm of Shimla is through Kalka mail. The famous Kalka – Shimla toy train runs between these cities of Himachal Pradesh is one of the prime attractions in Shimla, that gives splendid views of the snow-clad ranges of the Himalayas, covered with thickly populated forests of pine and oak..

Another chief attractions in Shimla is Kufri, which is located at a height of 2501 meters and is famed for its grassy meadows and exciting slopes. Himachal Pradesh Tourism completes the heady concoction with its Cafe Lalit at Kufri, adding up to the stately charm of this Hill Station in India, Himachal Pradesh.

One place that you cannot ignore is definitely the Mall Road in Shimla. All visitors to Shimla inevitably walk down the Mall, the main promenade that runs along the top of the ridge-a busy shopping area with old colonial buildings, souvenir shops and restaurants. At the top end of the Mall is Scandal Point, a large open square with a view of the town-a favorite rendezvous for visitors and the local people. Located at the heart of the town, the Mall Road in Shimla is one of the busiest commercial areas of this place. Built by the British during the colonial rule in India.

Shimla Ridge is located in the heart of Shimla & its beautiful tourist destination.he Ridge is the hub of all cultural activities of Shimla. It is situated along the Mall Road, which is the famous shopping center of Shimla. Most major places of Shimla like Lakkar Bazaar, Mall, Scandal Point, Jakhoo hill, etc. are connected through the Ridge. The main water supply of Shimla comes from the huge water reservoir that is located in the Ridge. The Ridge is famous for the various government functions and fairs that are held here. It is usually the venue for all such celebrations and events. The most famous festival that is held at the Ridge is the Summer Festival. This famous festival is held during the months of April or May and the whole of Shimla comes alive with colors and a riot of activities.

The most famous landmark of the Ridge is the Christ Church. This beautiful building is constructed in Neo-Gothic style of architecture. It is a famous tourist attraction of Shimla and should be visited when you come to Shimla.

The quiet and lovely suburb of summer Hill has secluded, shady walks and charming views. This charming spot is famous for its university of Himachal Pradesh that is located here. It is said that Mahatma Gandhi used to come to stay here during his visit to Shimla.

The Jakhu Temple in Shimla is situated on the top of Jakhu Hill. the temple is dedicated to lord Hanuman, the monkey god in Indian mythology. Hanuman was the most faithful aide of lord Rama (India’s most revered mythological hero). The temple of Hanuman is in the thick forests of Jakhu hills, and is on top the Jakhu Hill. The original dates of temple is not known, but it is believed to be existing from the times of Ramayana, a pre-historic event as per ancient Hindu texts. The Jakhu hill is the highest peak around Shimla, and is famous for its trekking options. The Jakhu hill offers excellent views of sunrise, sunset, mountains and town. The hill is full of narrow paths and roads which are for enjoyable walks.

Chail Sanctuary encompasses a vast forest cover. Chail wildlife sanctuary was identified and was declared as a protected area. Apart from its animals and birds, the main attraction of the sanctuary is the Chir Pheasant breeding farm… The forests are mainly dense covers of Oak and Pine, apart from the other major grassland covers. The forests in Chail sanctuary mainly comprises of Pine and Oak trees. Chail Sanctuary has mainly mammals in its area. The large mammals include rhesus macaque, leopard, Indian muntjac and goral crested porcupine. Other species include Himalayan black bear, wild boar, common langur, sambar, black-naped hare. The Chail sanctuary can be best viewed by the means of trekking, as the uneven land does not allow to take a jeep safari in the park. The forest officers also encourage trekking, so the animals and birds feel safe and secure.

Dharamsalais known for its scenic beauty, calmness and serenity. Tour to Dharamshala takes you to the high pine trees, tea gardens, timber yielding trees that are overlooked by Dhauladhar Himalayan ranges. A nearby snowline with numerous streams and cool healthy atmosphere makes the surroundings very attractive. Today Dharamsalais considered as one of the famous tourists destinations in the world, famous for its beautiful mountain ranges, temples, lakes and monastery, Dharamsala attracts large number of tourists from entire world. tourists can travel to Dharamshala to discover the land of sheer beauty and culture, which is also preserved in the form of museum known as Kangra museum. The Kangra museum gives an overview of the rich past of the region and on the other hand there are institutes that have been established to preserve the Tibetan art, cultures and traditions. As Dharamsala is situated in the Himalayas, the climate of this hill station is very pleasant during the summers but in winters the cold is very bad. Temperature can drop below the freezing point during the winters and heavy woolen cloths are required. During the summers the weather is mild and pleasant. Best time to visit Dharamshala is between March and October. Avoid coming here during the monsoon months.

Today, Dharamsala has become the synonymous to the Tibetan government in exile and the home of Tibetan leader Dalai Lama. Even if the Tibetan community dominates the town, still it has retained the colonial lifestyle and British frenzy.

Kullu – Manali, often described as twin valley of Himachal Pradesh is a nature splendor. One of the popular hill stations of India, Kullu – Manali attracts huge number of tourists across the globe for its scenic beauty and adventurous sports. Travel and Tourism department of Himachal Pradesh organizes various events like trekking, skiing and river-rafting on the turf of Kullu – Manali Valley.. The most charming and beautiful valleys of Indian Himalaya. Kullu-Manali that offers an excellent opportunity to the tourists to explore the century old temples, forts, and monasteries. Travel & Tourism department of Himachal Pradesh provides different packages to the tourists like honeymoon package, adventure package etc. From heat & dusty atmosphere of plains, plan a tour to Kullu-Manali that will enthrall your imagination and thoughts. Enjoy the most adventurous part of life by visiting Kullu-Manali, that provides an opportunity to go for trekking, mountaineering, skiing, water rafting etc. Travel to Kullu-Manali and enjoy your holiday package.. An important hill station of Himachal Pradesh, Kulluis often described as ‘Switzerland of India’.

Travel to Manali for the most enjoyable and remember able vacation of lifetime. Besides numerous number of holiday packages offered by the Indian Tour & Travel industry, a package to Manali could be unforgettable. One of the preferred tourist destinations of Himachal Pradesh, Manali offers an excellent opportunity for an adventurous sports activities like trekking, mountaineering and river rafting. Apart from the adventurous activities, tourists can travel to Manali to witness century old temples and monasteries like Hadimba temple, Manu temple and the GadhanThekchhokling monastery. While planning a tour to Manali, keep in mind the climatic condition of the region, an ideal time for the tour would be mid-May to June and September to November.

Dalhousie has charming architecture and panoramic views of both plains and the white-capped views of the mountainous ranges. The beauty of the city can be explored and discovered through for some of the best forms of adventure activities, trekking and mountain-climbing.. 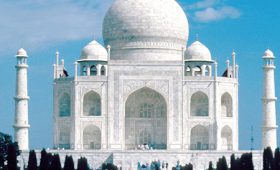 The Wonder of India – Taj Mahal 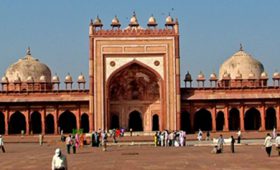