Every land has something of its own to boast off. In the case of Sikkim, it has many. This landlocked Indian state is really a wonderland in the shadow of the mighty Kanchenjunga, the third highest peak of the world. The picturesque perfection of Sikkim’s natural beauty, its vibrant culture and joyous festivals, salubrious climate, biodiversity……this thumb shaped state surely make the visitors spellbound. Sikkim is predominantly a tribal state. The lepchas, limpus, bhutias and Nepalese are the major folks (inhabitants). Though they belongs to different origins, they are simple folk, like most of the hill-tribes. The sikkimese show how different communities can co-exist in peace and harmony.

Besides the exotic natural beauty of Sikkim, the amazing sense of civic values and hospitality of the people attracts visitors. Unspoilt and magnificent Himalayan mountains, its flower-decked meadows and gushing rivers makes Sikkim a land of mystic splendour. The most unique feature of this small land is, one can experience the warm subtropical climate of the lower valleys and the chill of the snow-rugged mountain slopes within a matter of hours. The altitude of Sikkim ranges between 280 metres to 8585 metres. This sea level to sky level variations causes a wide diversity in fauna and flora. The zoological and botanical richness of the state is really awesome. Small is beautiful is right in the case of Sikkim. One cannot imagine the profound diversity it offers to the visitors.

Sikkim shares its border with Nepal in the west and Bhutan in the east, with the Tibetan plateau rises from its northern border and the southern side shared by west Bengal. And the state divided into four. They are east, west, north and south districts

March to late may and October to mid-December are the best time to visit this land of mystic splendour.

In spite of being a hilly state, transportation of Sikkim is comfortable and more frequent to experience the unexplored beauty of this hidden paradise. It has eight mountain passes connect the state with neighbouring countries. The Nathula Pass in Sikkim is the only open border between India and China.

New Jalpaiguri and siliguri are the nearest railway stations.

Bagdogra is the nearest airport. Apart from regular flight services, Sikkim tourism presents the Sikkim helicopter service from Gangtok to Bagdogra airport and back. This added means of transportation helps to see Sikkim from an entirely novel view. You can check out the symmetrical beauty of Mount Siniolchu, one among the many beautiful mountain peaks in the range or fly over Gangtok and get a comprehensive view of the layout of the town with its winding roads and many alleys.

Rice is the main food. Meat and dairy products also widely used. One can see the influence of different ethnic cultures in their food habits too. 20% of the basic food in Sikkim constitutes fermented vegetables, pulses and beverages. Millet and wheat are the common cereals used. Traditional dishes like Momos (steamed dumplings) and Thukpa (noodles in soup) are available everywhere and tastes delicious. Travellers can also relish Indian, Chinese and Tibetan cuisines in Sikkim.

Being a land of different people, many languages are commonly used. Apart from Nepali, Sikimese, Lepcha and Tibetan, English and Hindi also common in Sikkim.

Every nook and corner of this state has handful to satisfy the visitors. The mighty yet snowy mountain peaks, green and flowery slopes, mouth watering cuisines, colourful and polite folk, unique festivals are some of the attractions. Actually Sikkim offers tremendous opportunities in almost all aspects of tourism. A holiday in Sikkim is fascinating and at the same time challenging. One can step into this land in search of tranquillity, adventure, biodiversity and for its fine cultural heritage. The cool blue mountains suggests a heavenly calmness. Hot springs soothes one physically and mentally. Researches told that the water in these hot springs have medicinal impact. Glaciers and high altitude lakes take the visitor to an otherworld feeling.

Rivers Teesta and Rangeet offers a lot in river rafting. State’s vast unspoilt mountain ranges are surely a trekker’s delight. Treks through the pine forests, picture-perfect valleys and ancient monasteries to mountain lakes is really an experience and a half.

Home stay tourism gives a chance to close watch the rural Sikkim. Every place has its own distinctive flavours that make the travel experience unique. We can enjoy the spirit of tribal life and indeed it is a rare chance to touch the hospitality of common folk.

One can’t skip referring the fauna and flora of Sikkim. Rare snow leopard, Himalayan black bear, red panda, musk deer and blue sheep are the zoological treasures of the state. Sikkim can boast the fame of a wide spectrum of fauna too.

The State is naturally gifted having all sorts of destinations and circuits required for the tourists. And tourism being the backbone of the state, the government is keen to take necessary steps to provide all infrastructures like transportation, modern amenities and communication facilities.

Buddhism is the dominant religion here. And Sikkim is the only state in India with an ethnic Nepalese majority. For those who interested in Buddhism and Tibetology, Sikkim is a nice choice. The institute of Tibetology is the one and only of its kind in the world. The land is rich with fine, old monasteries rich with paintings and statues. Some monasteries have antique idols and magnificent statues in their collection. Yak safari, mountain biking and hand gliding also have wide scope in Sikkim.

lower down the hill is the famous orchid sanctuary. 5oospecies of native orchids are cultivated here.

This is close to Kanchenjunga. A famous Buddhist monastery, nestles 6000ft above sea level is the main attraction here. This is the second oldest monasteries of Sikkim. This spot offers a feel of space and airiness. One can watch the ruins of a palace from here. This place is surrounded by mountains, glaciers and passes.

A three-hour drive spot from Gangtok.

it is close to Gangtok.

This is a picturesque village with a hot water spring. The 135 feet tall statue of Guru Padmasambhava is situated at Samdruptse, South Sikkim.

This is the crowning glory of Sikkim. This is the third highest mountain in the world with magnificent snow and scenery. This is a jewel embedded with mist-clad mountain ranges. It is often referred as the undisputed monarch among the peaks of the world. The sacred mountain can be viewed from every corner of Sikkim and remains an intrinsic part of the consciousness of the people. The mountain sides are dotted with many caves which are considered holy by the people and revered as places of pilgrimage

Sikkim is rich in festivals too as its people are from different ethnic backgrounds. One can always hear soft beats of distant drums as yet another festivals starts. People are still pre-occupied with many mysteries of their religion. And it is quiet natural that the important festivals are as splendid as they are colourful. All communities have their own distinctive festivals and traditions. Dance is the centre of all the festivals. For the Sikkimese , Khangchendzonga is much more than a mountain and is revered as the abode of their guardian deity Dzo-nga. Even today the mountain god is invoked and prayed to during Pang Lhabsol, a major Sikkimese festival, which also commemorates the blood brotherhood sworn between the Lepchas and the Bhutias at Kabi in the fifteenth century. Every festival has all the elements that go into making a holiday an unforgettable experience

The main emporium of Directorate of Handloom & Handicrafts is located at a convenient place at ‘Zero’ Point in the capital city. Most of the handloom and handicraft items produced in the state are beautifully showcased here. These are thangka paintings, carpets, handlooms, wooden carved and painted items, wooden masks, cane and bamboo works, traditional hats and caps, multi-craft items, embroidered products and stuffed dolls. 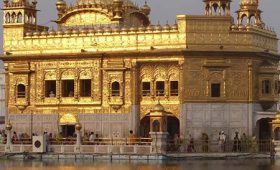